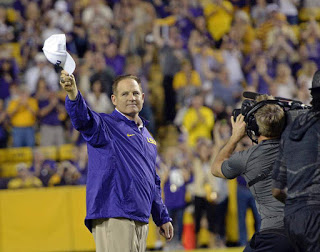 If you’ve followed my writing or heard me speak on the podcast I use a phrase “hero status.”  I use that phrase when talking about someone, who I’ve fallen in love with after watching them over the years.

While at the end of my college career (just a shade under a decade) someone once asked me, “don’t you think it’s immature to worship other grown men you don’t even know?”  I agreed with this person’s concept, and understood where they were coming from, but it had gotten me through life, and I didn’t know any other way.

Most of the guys I know were raised by their fathers.  Even if they came from divorced homes, dad was still in the picture.  And if not dad, step-dad.  This wasn’t the case for me.  I was raised by a single mom who worked as hard as she could to support my brother and I, which meant we didn’t see her much.  I was mostly raised by my grandfather, but he passed away when I was in 6th grade.

For as long as I can remember I’ve been deeply interested and involved in sports.  I wasn’t very good at playing them, but I loved them.  The big 3: baseball, basketball and football.  My first heroes were Nolan Ryan, Bo Jackson, and Larry Bird.  These men captured my attention and love as soon as I remember seeing them play.  These men raised me.  I was too young to really understand anything about their personal lives, and social media and TMZ didn’t exist then so they were able to stay private, for the most part.  It wasn’t who they were in real life that I worshipped… it was who they were on the field.  They were dominant.  They took charge of their teams and everyone around them followed.

In the more recent years the coach for my LSU Tigers, Les Miles, made the list.  I remember when he was hired I was upset.  I didn’t know anything about him other than he never finished better than 3rd in the Big 12 behind Oklahoma and Texas.  I thought, “This is ridiculous. I don’t want to come in 3rd! I want another championship.”

I was wrong then.

As seasons came and went, I understood this was the man I wanted leading my team.  This is a man I would follow.  This is a man I want to be like.  He was quirky and weird, but so am I.  He was loved by his players and seemed to genuinely love them.  He wore his hat funny and always looked strange when he clapped, but he was comfortable in his own skin.  He was comfortable being himself.  He was the calm in the midst of the storm.  He didn’t always make the right decision, but he always made it exciting in the end.  He was a gambler, and he gambled on his guys!  I fell in love with this man, quirks and flaws in all.  He was a leader.

I am fortunate to have never been able to meet any of my heroes from the sports world.  I say fortunate because I don’t want to see behind the curtain.  I don’t want to find out they were a jerk in real life. But I wonder, from time to time, if I ever met them, what would I say?  What would I ask them?

I understand why he had to go.  I wish things were different, but it is time for a change.  There will be a new era of LSU football, for better or worse.  But there will never be another Les.  Thank you, Coach Les.