Skip to content
Bob Stoops is retiring… but why?

I don’t really know exactly what to say here.

Here’s what we know – Lincoln Riley, the team’s offensive coordinator, and the 32 year old wonderboy that turned down overtures from several other programs to be their head coach the last 2 offseasons, will be the new head coach.

Stoops is expected to remain with the University in some capacity.

There’s not much more than that to it.  But there’s got to be something else going on, right?

Oklahoma returns a senior quarterback with some amazing talent.  They’ve won the Big 12 the last two seasons and are an overwhelming favorite to win it again this season.  They’ve had back to back Top 5 finishes.

Not only does he return an awesome team, but he’s only 56.  And it’s June.  These things don’t usually happen in June.

Something else is going on here, but nothing has come out as of yet.  Hopefully it’s not health related.  We’ll be watching for more and will update once we figure it out.

Stoops and his wife just bought a $2.25M house last month on The Gold Coast in Chicago, IL.  Think he was looking towards retirement last month?  Also…

Bob Stoops’ dad Ron passed away when he was 54 after suffering a heart attack while coaching a HS game & dying on way to the hospital. https://t.co/nW70WeimuF 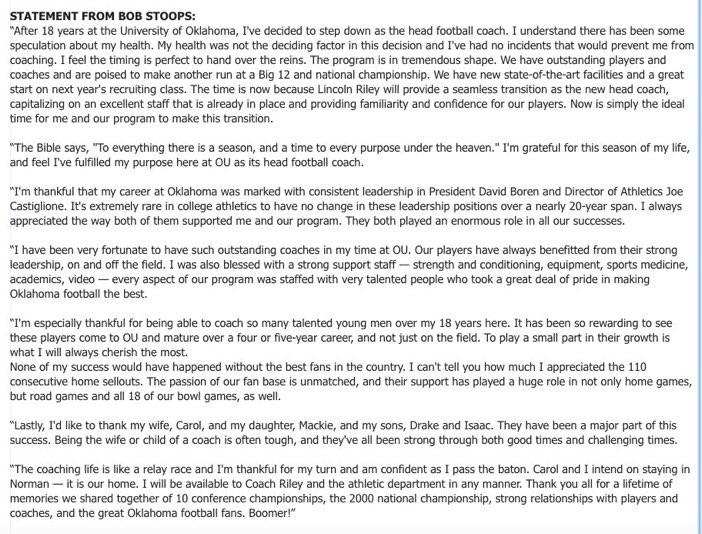