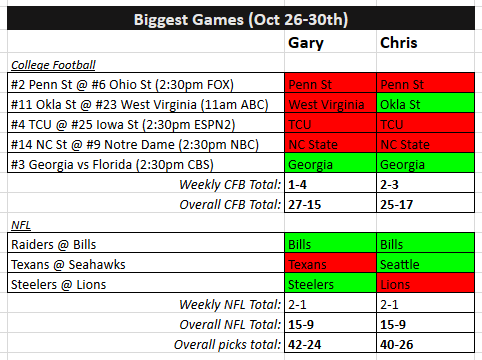 I had been talking up Ohio St for weeks, and couldn’t pull the trigger at the end.  I thought West Virginia would be able to put up points… and they did, but Oklahoma St looked great after only scoring 13 (in an overtime game) against Texas.

I thought NC State, coming off a bye week, would be able to stuff the run against Notre Dame and sneak out a win.  And I thought TCU would win a close one – had no idea Iowa St would hold their offense scoreless. 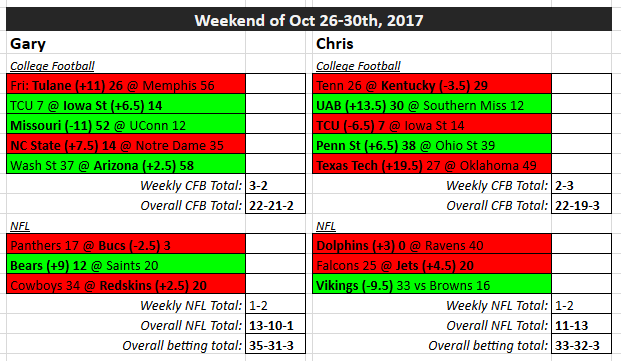 Started out with a loss on Friday.  I still have no idea how Memphis’s defense is able to slow teams down right now with so many guys out.

Went 3-1 on Saturday, so that was good, and the one I lost was the one I felt 2nd best about.  NC State has one of the top rushing defenses in the country and they don’t turn the football over… and both of those things failed them on Saturday in South Bend.  Notre Dame is absolutely for real.

I’m still 4 games over .500 for the season, if you combine NFL and CFB, so I’m looking forward to getting that number much higher as the season progresses.

About Gary Segars 1222 Articles
Gary began his first website in 1998 as a sophomore in high school, writing reviews of cds and live shows in the Memphis area. He became editor of his college newspaper, then moved towards a career in music.He started the infamous MemphisTider.com blog during the 2006 football season, and was lucky enough to get into blogging just before the coaching search that landed Nick Saban at Alabama. The month and a half long coaching search netted his site, which was known for tracking airplanes, over 1 million hits in less than 90 days. The website introduced Gary to tons of new friends, including Nico and Todd, who had just started the site RollBamaRoll.com.After diving into more than just Alabama news, Gary started up his first installment of WinningCuresEverything.com in 2012. After keeping the site quiet for a while, it was started back up in April 2016. Gary then joined forces with high school friend Chris Giannini and began a podcast during the 2016 football season that runs at least 2 times a week, focusing on college football, NFL football, and sports wagering, and diving into other sports and pop-culture topics.E-mail: gary@winningcureseverything.com Twitter: @GaryWCE
Website Facebook Twitter