Listen to Podcast 130  to get all of these picks and more reasons behind them: 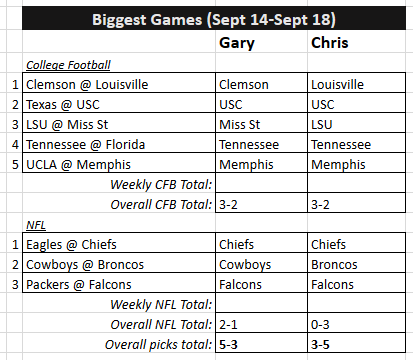 Chris and I see things completely different on this one.

I think Clemson is a monster on the defensive line, and Louisville’s offensive line is their biggest weakness.  We saw what happened when that offensive line fell off late last season.  11 sacks given up against Houston in a 33-10 loss.  4 turnovers in a 41-38 loss at home against Kentucky.  A 29-9 loss to LSU in the bowl game.

So far this year, Lamar Jackson has feasted on Purdue and North Carolina.  In 2016, North Carolina finished #127 in the country (out of 130 teams) in total defense.  Purdue finished #106.  Louisville won both of those games close.

And you’re telling me that Jackson is single-handedly going to beat Clemson?  Get outta here.  Chris thinks it’s happening – there is definitely something to home underdogs in primetime spots – but I think Clemson is immensely more talented than Louisville, and they’ll handle this team accordingly.

Ahh… big names in a game that really appears to be one-sided.

USC has so much more talent than Texas right now.  It’s really kinda embarassing.  This game SHOULD be a lot different than the last time we saw these two teams play, back in the 2005 National Championship Game.

But… Texas is starting a new QB that looked like he fits what Tom Herman wants to do on offense quite a bit better than Shane Bechel.  And you’ve seen in the past how much Tom Herman teams get amped up to play big time opponents.  Remember, as a head coach, Herman is 5-0 STRAIGHT UP as an underdog, and he was 11-0 straight up as an assistant at Ohio St!

I have a feeling there could be some crazy stuff happen in this game to keep it close for a while, but, eventually, USC will be too talented, and too good, and they’ll pull away in this one.

But if Texas pulls a shocker… you can’t say it was a surprise.  We should expect that kinda thing from Tom Herman teams by now.

Who would have thought the most interesting game in the SEC, in ANY week this season, would be in Starkville, MS?

And that’s exactly what we’ve got here – LSU’s S&P numbers are through the roof.  They’ve blasted two really bad football teams (Yes, BYU is bad. They rank #125 in the country in scoring offense AND total offense through 3 games, including one against Portland St, who gave up 35 to Oregon St).

Mississippi St, however, appears to have some legitimate players all over the field.  They look fast, and big.  Strength coach Nick Savage is now in his 2nd season, and the level of play appears to be increasing this year.

LSU should have more depth, and thus, would win the ballgame, but with some injuries nagging the Tigers, the fact that Miss St has played them close the last 2 years (and won 3 years ago in Baton Rouge), coupled with this being a night game in Starkville, LSU could be ripe for an upset.  We get a chance to see if either of these teams can be a contender for the rest of the season.

Chris and I BOTH picked Butch Jones to win in Gainesville?

Honestly, though, how could you pick Florida in a game against any team with comparable talent right now, even if the game is at home right after Hurricane Irma came through?  Yes, I believe the fans will be fired up for this one, but that still doesn’t mean that McElwain’s offense will be able to put up enough points.

I don’t buy that Butch Jones is a good coach.  But Florida still has all of the same guys suspended that were out against Michigan two weeks ago.  The Gators didn’t get a warm-up game last week (the game against Northern Colorado was canceled due to the Hurricane), so Felipe Franks did not get more reps and a chance to build his confidence after leading Florida to only 3 points in a big-time national game against Michigan in Week 1.  If Tennessee gets out in front early, this could be a looooong afternoon in the Swamp.

National ABC audience for the Memphis Tigers after not playing last week (due to Hurricane Irma), means Mike Norvell and crew have been working on UCLA since last Friday.

It may not matter.  Josh Rosen has opened up the season on a different level, scoring 45 against Texas A&M and 56 against Hawaii.  Memphis was outgained in the first game by ULM.  Yes, you read that correctly.  Toss on 3 big time season-ending injuries to DL Jared Gentry, LB Jackson Dillon, and LB Darian Porter, and you’ve got a recipe for disaster.

But… Both of UCLA’s games so far were late afternoon home games.  This game is at 9am PT.  The perfect spot for Memphis to be able to strike early and often.  Home underdogs have a way of winning these early games.  Memphis was in this exact spot 3 years ago when #11 Ole Miss came to town, and they dominated the Rebels.

The Liberty Bowl will be packed, and I’ll even be making an appearance at this one.  Expect a shootout, and some crazy things to happen.

The Chiefs went into Foxborough last week and absolutely put it on the Patriots in the 4th quarter.  It wasn’t a fluke either.  Just a good ol fashioned beating.

The Eagles did the same thing in Washington to the Redskins.  Of course, that won’t get as much hype as winning in New England, but they still looked good.

The Chiefs have some new dimensions on their offense: speed.  Something they didn’t appear to have for a while.  The Eagles defense looks really good.  Which one will break first?

Chris and I both think the Chiefs win this one at home.

Chris is a believer in the Broncos after a home win over the Chargers on Monday night, where Trevor Semien looked like a legit QB.

The Broncos defense still looks like they’re for real, but after going up 24-7 in the 3rd quarter, the Chargers figured things out and Phillip Rivers threw 2 TDs in the 4th quarter.  It took a blocked FG as time expired for the Broncos to sneak out with the win.

The Cowboys, however, dominated the Giants for the entire game in a 19-3 win.  Ezekiel Elliot will be playing for the forseeable future, and I think he’s a difference maker in this game.  Chris thinks the Broncos defense will be too much.  Should be a fun game on Sunday afternoon.

The opening of Mercedes-Benz Stadium for the Atlanta Falcons this season.  It’s going to be loud, and their fans are going to be ready for a big win over the Packers… who just so happen to be the last team that played the Falcons in the Georgia Dome last season (the Falcons won the NFC Championship game 44-21 over the Packers).

These home fans haven’t seen their team play, in-person, since giving up a 28-3 lead and losing in the Super Bowl to the Patriots, so they’ll be fired up for a Sunday night game.

Chris and I agree on this one… too much home cooking for the Falcons to lose this one, even if they did look less-than-stellar at the Bears last week. 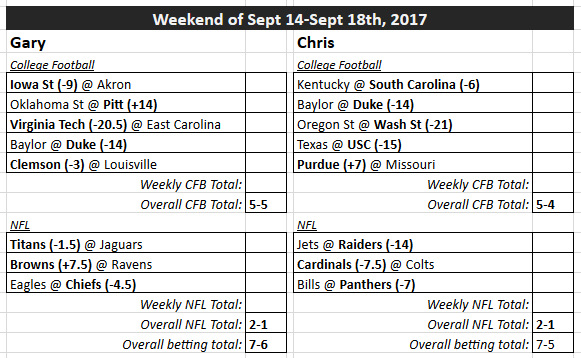