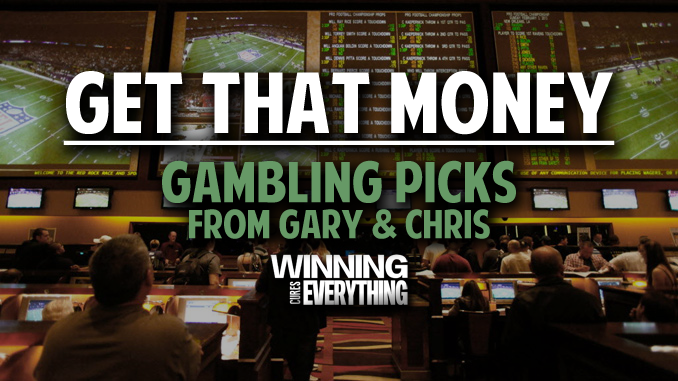 Listen to Podcast 121 to get all of these picks and more reasons behind them:

Alabama is #1 in both the AP and Coaches polls.  Florida St is #3 in both.

That alone makes this a MONSTER matchup.  But toss in the storyline of Jimbo Fisher being Nick Saban’s former offensive coordinator, along with the stat that Saban is 10-0 in matchups against his former assistants, with the games being won by an average score of 40-10, and you’ve got intrigue.

If you’re looking for a game that has NFL talent all over the field… y’know, before the LSU / Alabama game in November… this game will provide plenty.  Alabama starts 17 former 4 or 5 star recruits, while Florida St starts 15 such players.

This should be a lot of fun Saturday night, and it’ll be a party all day Saturday, as ESPN’s College Gameday will broadcast live on-site Saturday morning.

This game looks a lot more fun than it really may be, after Florida has suspended TEN players for the season opener.

Florida still has talent, and they just announced that Felipe Franks will be starting at QB for the team, instead of grad transfer Malik Zaire, but this game could definitely swing Michigan’s way early and often.

I look at it this way… Jim McElwain knows his team is talented enough to win the SEC East again.  And he knows he has to discipline his players.  This is a game he could lose even if he played all 10 of these guys, so why not sit them for this game, get it out of the way, and then go win the division?

Either way, it’ll be fun to see 2 big name programs open the season in Arlington.

This game was originally supposed to be held in Houston, TX, but the game has been moved to the Superdome in New Orleans due to the historic flooding in Houston due to Hurricane Harvey.

I was originally shocked at the line here – LSU was a 14 point favorite when the game was in Houston… and when LB Arden Key was ruled out, the line didn’t shift.  And then the game gets moved to New Orleans, and now LSU is a 16.5 favorite.  The day after the game was officially moved, it was revealed that RB Darrius Guice may not play… and if he does, he won’t be 100%.  And the line still didn’t shift.

I expect this to be an ugly game, as LSU is breaking in a brand new OC, and they still have a QB that’s not a great passer, and BYU seems to always play more talented teams close.  I think LSU wins this one, but that line makes it even more interesting.

This is a monster game for Chris, because he’s completely on the South Carolina / Jake Bentley bandwagon.  Chris has South Carolina going 9-3 and winning the SEC East.

They don’t have to win this game to win the Eastern division, but it would definitely springboard them into some interesting matchups in the first month of the season at Missouri, against Kentucky, LaTech, and at Texas A&M.

NC State has several big time fans right now as a potential playoff sleeper – most notably Cole Cubelic, who has the Wolfpack in his Playoff.

Bentley and the Gamecocks will have their work cut out for them in this one.  It appears to be two evenly matched teams.