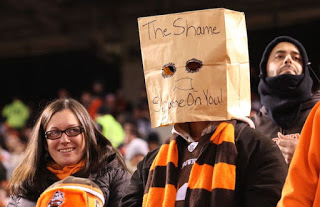 Plagued with boring games, dreadful coaching, and worthless quarterback play, ratings and interest overall have been down. That doesn’t mean the season has been a complete waste. Teams like the Raiders and Lions have pulled themselves out of the gutter to lead their divisions and have been unbelievably entertaining. Their young QBs are both in the race for the league MVP and their offenses seem to be clicking on all cylinders.

The biggest surprise of the season has to be the Dallas Cowboys. When Romo went down in his first pre-season game it seemed as if all was lost. Rookies Dak Prescott and Ezekiel Elliott are leading this team and energizing the Cowboys more than ever before, it seems. They’ve won 11 straight games and are the first team to clinch a playoff spot.

Now if you’ve paid any attention at all to the sport this season you know all the stories I’ve referred too.  One story most everyone is trying to avoid paying attention to is my Cleveland Browns. With only a month left to go in the season they find themselves without a single win. Only 1 team in history has ever finished 0-16. Led by a first year coach, and a completely new management staff, this season has been a struggle, to say the least. It was week 8 before they even had a quarterback throw enough passes to qualify in this season’s stats with the rest of the league.

As a fan of the game, having watched it my entire life and played the sport for a short time in school, I understand the dedication and sacrifice it takes to prepare to play. I remember the Lions 0-16 season from 2008.  I remember feeling painfully sad for that team and their fans to go the entire season without the experience of winning a single game.  The word “defeated” comes to mind.

In professional sports everyone is defeated eventually, but that’s not what I’m talking about.  I’m referring to the soul-crushing defeat that people experience once or twice in a lifetime.  The feeling of giving it your best and never seeing success. Is a single season a lifetime? For some of these players it could be.  Some of the management team and coaches it probably will be.  Having a 0-16 record on your resume is a catastrophic failure that will never go away. No team should have to endure that torture.

The final story hasn’t been written for the 2016 Cleveland Browns yet.  There are still 4 games left to change the ending to this tale. If they don’t find a victory this season it would be fitting that Cleveland join Detroit in this shame.  Those two cities are linked together in the recent history of our nation as two of the bastard cities this country has to offer. The butt of every joke. Places people refuse to take seriously anymore.  Once powerhouses of industry in our country are now wastelands of empty factories and known for their poverty and brokenness.

As I watch the Lions play with fire and excitement, it gives me hope that one day my Browns will not be playing for “next year.” The story isn’t written for Detroit yet either, but with their play so far they find themselves positioned to make the playoffs and win their division.  If they can finish strong the once desolate Lions will host a playoff game in the city of Detroit. With every win they get, I see hope.

And hope is all a defeated fan can ask for.

I still watch every Browns game, always looking for a reason to keep cheering. Four games left and I will watch them all with hope, because hope is all a defeated fan can ask for.