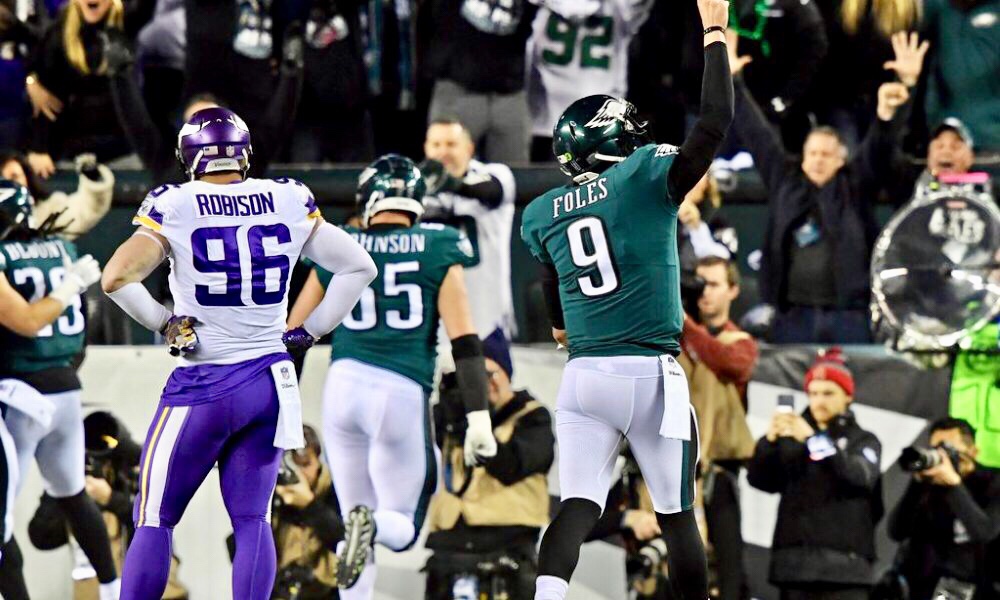 In 2013, Nick Foles went 8-2 as a starter for Chip Kelly’s Philadelphia Eagles.

He threw 27 touchdowns and only 2 interceptions.

For the entire year.

Yes, you read that number correctly. 27 TDs and 2 INTs in one season. His only regular season loss was a 48-30 whipping at Minnesota.

So what has he done since then?

Well, for starters, he never made the playoffs again until this year.

In 2014, he went 6-2 as the starter before breaking his collarbone the first weekend in November. He had a completion percentage below 60%, and he threw 13 TDs to 10 INTs. After that season, Foles was traded to the St. Louis Rams.

In 2015, his completion percentage dropped to just over 56%, and he threw 7 TDs to 10 INTs before being benched in early December.

In 2016, he ended up with Kansas City, winning both games in which he played significant minutes, as Alex Smith was out injured. In those 2 games, he had 3 TDs and 0 INTs, and his completion percentage jumped back up to 65%.

The NFC Championship game looked like a man possessed. Foles was otherworldly, throwing deep and finding open receivers, only missing 7 passes out of 33.

So, a 75% completion rate, 3 TDs with no turnovers, and throwing over 300 yards… has he ever had back to back games like that in his entire career? Because you would have to assume the Eagles will need that to be able to beat Tom Brady and the New England Patriots in this year’s Super Bowl.

In 2016, with the Chiefs, he did not eclipse 300 yards in his only start, or in the game in which he came in after Alex Smith’s injury.

In all 3 of his NFL playoff appearances, he has never had a QBR lower than 100. But how many times has he hit that in the regular season?

This season, after starting for Carson Wentz, he had one regular season game where he eclipsed a 100 QBR – against the Giants.

In the playoffs, Nick Foles has been a different animal, but he’s never been away from Lincoln Financial, the Eagles home stadium. This will be a different situation.

If I had to wager, we will see a very different, less efficient, Nick Foles than we saw against the Vikings. That doesn’t mean that he won’t be able to make plays that could win them a Super Bowl… but if the Eagles win, I would wager it would be because of the defense more so than anything the offense does.