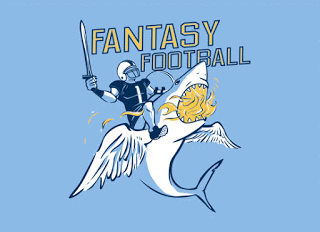 It’s August. Training camps are getting started and sports nerds are gathering information to build imaginary teams to beat their friends’ imaginary teams. I couldn’t be happier.
I’ve been playing fantasy football since the season of 2003 and have been the commissioner and champion of multiple leagues. Over the past 13 years, I’ve played the game passionately, and how the game has changed in that time is staggering. In future posts, I’ll explore those changes. But for now, let me give you my always-growing list of rules for Fantasy Football that have kept me playing the game for so long. Following these will lead to a more enjoyable season. If you haven’t gotten really involved in playing maybe this can help. If you play competitively every year but don’t have as much fun throughout the season as you would like, then hopefully following these rules will help you regain your passion for the game.

#1. It is supposed to be fun, so draft players you enjoy watching. Build a team with guys you can root for and be proud to cheer on. This is the most important rule to me and goes against what every other fantasy analyst will preach. They will tell you “if the player has value and can help you win, draft them.” I say if you are a Browns fan (such as myself) then first of all I’m sorry. Second: don’t draft any player from the Ravens!!! They suck and they took our team and our championship!!! The love for the game and your loyalty is important to enjoying the season. There have been great fantasy studs that played for the Ravens over the years that would have helped me win championships. That’s fine; I’ll do my best with other guys! I couldn’t live with myself cheering on Ray Lewis and the Baltimore defense needing another sack or turnover so I can win my week. Every team has that rival and ever person has their feelings about specific players they love or hate. Stay away from people you wouldn’t be excited to cheer for. That’s never any fun. And don’t be afraid to reach for guys you want to have on your team.
#2. Play with people you’re close to. Your league will see you at your highest and lowest moments. You need to be free to talk trash, enjoy humiliating them, and have a good time being in the league together. Nothing is worse than getting in a league with people you don’t know well, when your team dominates and you have to be nice about it. The other side of that coin is just as important: you don’t want to lose to someone you don’t know or like. If you find yourself being the loser of the week, you would much rather it come from a buddy you’ve known and respected for years than the weird granola-eating accountant from your work league who thinks he’s better than you because he has a great credit score and he doesn’t rent a room from his grandmother. Well Frank, she is a delight to be around and she makes me fudge every other Friday!!! But back to Fantasy: don’t be in a league with Frank.
#3. Play for STAKES! Winning has to be important and losing must cost you something. You don’t have to involve cash if you aren’t comfortable with that. I will tell you some of my most enjoyable wins have come from the opportunity to publicly humiliate my friends. Agree to terms before the season or the weekly matchup. Get creative. Pay their bar tab or make them clean your car. Use your imagination.
#4. Never, ever, under any circumstances, quit on a league mid-season. If someone in your league is struggling and looks as if they are quitting, then do everything in your power to encourage them to stick it out. Finish strong. Don’t abandon the league. You made a commitment; you have an obligation to the league you are in. I don’t want to hear about all the injuries or how no one will trade with you and your team is falling apart. Tighten up the jockstrap and get back in the game. This is a big reason why I encourage you to persuade the commissioner of your league to offer weekly rewards of some type.
#5. Never welch on a bet. Be a man of your word. If you agree to terms and come up short then take your punishment like a man. Your friends will laugh at you. You will embarrass your mother. Your wife might leave you. But your league will respect you for following through. Also, and this is very important, make all humiliation punishments FUNNY not CRUEL. Remember Rule #1. This should be fun. I do not condone cruelty of any kind. Don’t be “that guy.”
#6. No one cares about your “other leagues.” The reason # 2 is so important is that no one outside of the league you are in cares about any other leagues you are in. Stop talking about them unless they ask (which no one would ever do because THEY DON’T CARE). Any league other than the league you are in with the people you are talking to is considered the “other league.” They know you are in it. Hell, they are probably in another league as well. But they have the decency to keep it discrete and not talk about it with you.
Those are the rules I have put together through the years of playing this great game. I hope it has helped you get into the football spirit and get you excited for your upcoming drafts. Good luck throughout the season and feel free to shoot me some more options for rules you think I might have missed.
Gary Segars2016-08-02T14:46:00-05:00