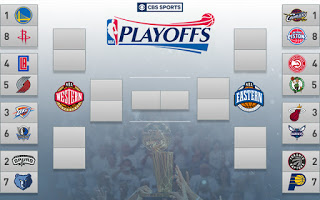 Gotta start off this morning with how mostly terrible the opening round of the NBA playoffs have started.  Out of 8 playoff games this weekend, we had 6 double digit games, with 5 by at least 20, and 3 of those were by more than 30.  And these were not flukes.

What’s crazy is that the only single digit game on Sunday was the Cavs over the Pistons… and most everyone expects that one to go only 4 or 5 games.  Basically, Cavs just don’t care about this series.  LeBron James is 10-0 in the first round of the playoffs, so it’s a pretty much foregone conclusion that they’ll win this series pretty easily.  The Warriors should sweep the Rockets (even with Steph Curry possibly out this game with a sore ankle), the Spurs should sweep the Grizz, the Thunder should sweep the Mavs.  The Hawks / Celtics looked like it would be the best series, but Avery Bradley went out for the Celtics in the game with a hamstring injury and won’t be back.  Basically… wake me up when the 2nd round starts.

This weekend, the Tennessee Titans did what any terrible franchise is known for doing… and that’s screwing up relatively easy things.  In an attempt to appeal to families in Nashville, Nissan Stadium hosted “Family Movie Night” at the stadium this past Saturday, showing the movie “Minions” and allowing families to bring blankets and picnics and sit on the field to watch the movie on the jumbotron… and they forgot to turn off the sprinklers.  The videos are awesome.

Family movie night at @NissanStadium … Forgot to turn off the sprinklers. pic.twitter.com/tonlG9qOOL 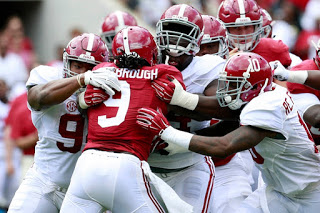 This weekend we saw 7 SEC Spring football games, and we didn’t learn much, other than this.  1. Alabama is still gonna be really good… but their quarterback looks like it will either be true freshman Jalen Hurts (who went 11 of 15 for 120 yards and the game winning touchdown) or redshirt freshman Blake Barnett (who went 9 of 16 with 70+ yards).  The “veterans,” Cooper Bateman and David Cornwell, looked like the job is just too big for them.  Great practice players, but can’t get it done in big situations.  2.  Alabama’s defense is going to be awesome again, along with their running game.  Damian Harris looks like the 2nd coming of Mark Ingram.  3.  Georgia’s Jacob Eason looks like the real deal.  Dude showed out in front of 93,000 at Sanford Stadium Saturday.
Another thing is that SEC fans still love spring football.    Here are the totals from the spring games: 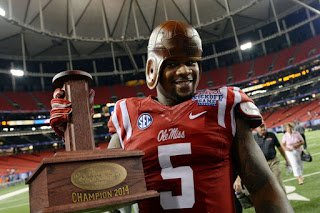 Robert Nkemdiche, fresh off trying to prove how “grown up” he’s becoming by writing off his little brother because he’s a “bad influence,” has given NFL teams another reason to question his judgment.  This weekend he informed some reporters that his first purchase as a professional athlete will be a pet panther.  Yes.  A real panther.  He wants a black one.  This is how the conversation went down:

And he’s watching Instagram videos of domesticated panthers. He likes the black ones, likes how their eyes glow. He stares at shots of people playing with panthers, wrestling with them as if they were dogs, nudging faces, fearless when they open their mouths. “It’s sick.”
It’s insane.
“No, it’s not. They’re like cats.”
Can’t he see the headline? Visitor Mauled by NFL Star Robert Nkemdiche’s Pet Panther.
“If someone comes over and is scared, I’ll put the panther away.”

This is real life.  This dude needs to stop talking to people. 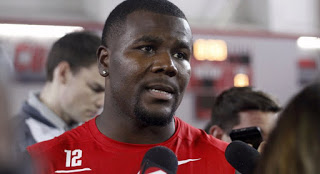 And finally, Urban Meyer talked about Cardale Jones over the weekend,he’s not great at school.  He claims that Cardale will be better when he doesn’t have to worry about things like going to class.  It’s amazing to me to think that this may have been a factor in why Jones was not very good this past season, when he was eventually beaten out as starting quarterback by JT Barrett.  Blows my mind.  But hey… he was great over a championship break in late 2014 and early 2015.  Maybe it makes sense.