Yesterday, Conor McGregor tweeted that he’s back on UFC 200… and then, a few hours later, Dana White comes out and says that’s not true, and he’s not sure why Conor would tweet that.

So what happened?  Well, here’s my thought process.  Conor’s manager spoke with someone in UFC who told him they are gonna get this done, but Dana never had any intention of doing it.  Basically, Conor embarrassed the organization last week, and the organization embarrassed Conor this week.  An eye for an eye.

The question remains, what does this mean for Conor McGregor and the UFC going forward?
Well, he will definitely be fighting, and since Nate Diaz is taking a vacation instead of getting ready for UFC 200, this looks like the McGregor / Diaz fight is still on.  UFC is getting more bang for its buck here, because there’s no doubt that this fight will do the same numbers that UFC 200 will do, regardless of who is on the undercard.  McGregor and Diaz will make more money each on this card than they would on UFC 200, so it’s mainly about making sure UFC has 2 huge fights instead of just one.  Pretty good power play on White and McGregor’s part.  At this point, everyone is going to want to see this fight. 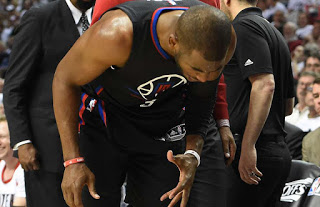 Last night, Chris Paul went down with a metacarpal fracture.  He injured his hand when going for a
steal.  Later on, Blake Griffin went down with a quad injury.  Griffin looks like he might be back soon, but Paul it appears may miss the entire rest of the postseason, which basically, to me, shows that injury karma has moved from the Grizzlies, who are now out of the playoffs, over to the west coast.

I’ll say this though — without Steph Curry, I think Portland can beat the Warriors.  Their backcourt is all-star caliber, and if they’re hitting shots, like they normally do, then they can get to the finals.  Which would be unreal. And awesome. 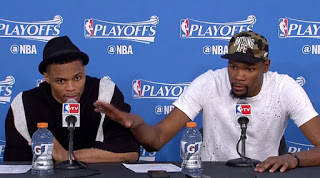 Kevin Durant must be Russell Westbook’s agent.  Because he didn’t even let Westbrook respond to a reporter who asked if he had heard about Mark Cuban saying he’s not a superstar.  He responded for him: “He’s an idiot. He’s an idiot. Don’t listen to … he’s an idiot. That’s what we’ve got to say about that. He’s an idiot. Next question.”

Pretty awesome response, honestly.  Cuban talks a lot, and Durant isn’t normally so outspoken, but something hit a nerve with him.  It was entertaining to see that from that particular guy.

North Carolina received their updated Notice of Allegations… and there’s really nothing new in this.
Roy Williams has got to be dancing in the streets of Chapel Hill.  Which amazes me.  In the case against Donnie Tyndall at Southern Miss, they took the testimony of one guy that had originally lied to them and used it to absolutely destroy Tyndall’s career, after he had been fired from Tyndall’s staff for lying to the NCAA.  In the North Carolina case, Rashad McCants straight up tells the NCAA that Roy Williams knew all about the scam classes in the UNC academic scandal, and they completely ignored it.  The only way this makes sense is that Southern Miss doesn’t make the NCAA that much money, and North Carolina does.  Ridiculous.