Yesterday, when I was putting together what I wanted to write about this morning, I figured I would start out with simple stuff, such as Bomani Jones’s shirt choice on Mike and Mike yesterday, or Ernie Els having to 7-putt on the first hole at Augusta (yes… 7-putt)… but then news broke late last night that Georgia Tech and Josh Pastner are in negotiations to bring the embattled Memphis coach to Atlanta…

… and in the city of Memphis, everything changed overnight…
The biggest issue with Pastner was the growing discontent with the fanbase.  They had to have a serious promotional campaign just to be able to average more than 6,000 people through the turnstiles at FedExForum in order to get a check from the Memphis Grizzlies as part of a deal they constructed years ago.

That’s right.  The men’s basketball team only averaged a little more than 6,000 actual fans in attendance at home games this year.  Just a few years removed from averaging 16,000.

With waning fan support,  The University of Memphis owed Josh Pastner 10.65 million dollars for a contract through 2021.  Memphis is currently in the middle of renovations on their South Campus to bring it up to date.  They’re also working on building an indoor practice facility for football, along with other things.  They’re going all-in for football.  Their donor money has tapped out.  The only solution was to keep Pastner and hope for the best.  The bad thing about this is, while it saved the school from having to write a $10M check, it would have put them in a terrible position with trying to get into a bigger conference (hey there, Big 12), with a weakened basketball program and a first year head coach in football.  The only way to generate a little excitement and hope in basketball was if Pastner somehow found a school that would hire him as their coach (after going 18-14 and 19-15 the last 2 years, with no postseason), which would get Memphis out of having to write the check.

Basically, if this goes through, as Jeff Goodman reported last night (here’s the story), then Georgia Tech saved Memphis… if this deal goes through.

This morning has gone from hoping to not have to think about Memphis basketball, to wondering what the future could bring.  I’ll be writing about who I think will take the job in a bit… and the reporters that keep spreading the Gregg Marshall rumors on Twitter are just killing me.  Because, while I understand that he’s never turned down a job as good as Memphis… he’s turned down some really high paying jobs, and is currently making $3.3M a year, which is 9th highest in the country.  Memphis would have to go above that, and I don’t know that they’re in a position to do it.  So I’ll post later about that.

Now, on to the rest of what I wanted to get to today. 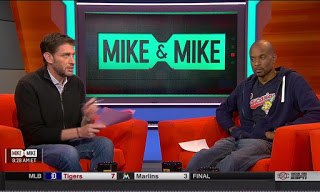 1. Bomani Jones was guest hosting on Mike & Mike yesterday morning, and his shirt caused quite the stir.  He wore a Cleveland Indians shirt, but instead of Indians, it said “Caucasians” and had a dollar sign on it instead of a feather.  Which I found funny.  And while I do agree that there would have been a major problem had Mike Greenberg worn the same shirt that said “Blacks” on it… I think it was just a funny shirt that really shouldn’t have gotten so many people talking.  Because everyone knows Bomani is the king of the trolls… and everyone talking about it gave him exactly what he wanted.

2. Broncos coach Gary Kubiak has talked to Johnny Manziel about his possible fit with the Broncos, according to Adam Schefter at ESPN (http://espn.go.com/nfl/story/_/id/15155074/gary-kubiak-johnny-manziel-talk-fit-denver-broncos).  I don’t know that it means they’ll sign him… but I think it could be an interesting fit.  That kid being in Cleveland, around a losing program, was not a good thing for him.  I’ll still cheer for Johnny Football, as long as it comes out that he didn’t actually beat up his ex girlfriend.  He’s an exciting, talented football player, and, in the right situation, I still think that dude could thrive.

3. Ernie Els 7-putted the first hole at the Masters.  And it was ugly.  Like, a nightmare scenario played out in real life, in front of millions of people.  By God, was it painful to watch.  Els isn’t completely over the hill.  He just lost it on this hole.  And the crazy thing is, after going +6 on the first hole… he only went +2 for the other 17 holes, and is tied for 81st out of 89, which blows my mind.

4.  Chris Vernon livens up the Masters.  If you don’t give a damn about golf… this will immediately make you more interested.  Chris Vernon and Jon Roser give you the run down… with their own style of Memphis hip-hop.  It’s the best thing on the internet.  Period.

5. Are the bird sounds on CBS during the Masters actually fake?  I saw @BustedCoverage posting about this on twitter yesterday, and it blew my mind.  I guess I should have known they wouldn’t be so conveniently placed exactly when they were showing clips and intros if it was natural, but it was quite the shock to see so many people replying that there really aren’t that many birds at Augusta.  Apparently CBS was outed back in 2000 for this, because they put the wrong bird calls in for the region, and professional bird people (…really, who goes into birds as a profession?) called them out for it.  Interesting read here: http://bustedcoverage.com/2016/04/07/masters-birds-chirping-sounds-cbs-fake/