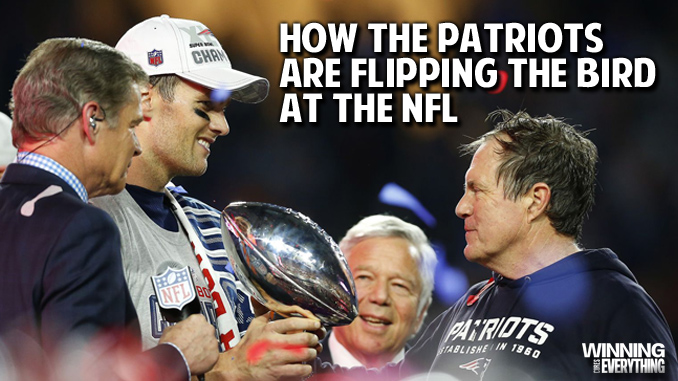 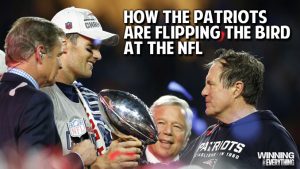 With the entire football world descending on Houston, TX this week for Super Bowl 51, we ended up with the best possible matchup for the big game.  A fresh face, and an old enemy.

Make no mistake, the Patriots are definitely the enemy.  Almost everyone (sans actual Patiot fans) want the Falcons to win this game.  John Ourand, from the Sports Business Journal, reported several public policy polls, and the numbers are about what you would expect:

53% of football fans want the Falcons to win.
27% want the Patriots to win.

Numbers don’t lie.  The Pats are the enemy.

So it should not be surprising that the NFL and Roger Goodell would MUCH rather hand the Lombardi Trophy to Dan Quinn and Matt Ryan on Sunday night than Bill Belichick and Tom Brady.  But it’s not because the general public would prefer it.  Moreso, it has to do with the fact that the two most well-known Patriots have done what they can to give the NFL the bird.  Here are several examples.

Ol’ Bill has a problem with authority.  And if you’ve ever wondered why he looks like he’s homeless on the sidelines, with his hoodie with the cut-off sleeves, Dan Wetzel did a great job of explaining the situation in a November 2015 article.

“According to sources through the years, after Reebok inked a reported $250 million deal as the official outfitter of the NFL in the early 2000s, one of the tenets of the contract was that coaches would wear their gear.

Belichick rejected the concept on principle, arguing that some NFL executive in New York shouldn’t be telling grown men how to dress. He’s a coach, not a fashion model, after all, and the whole thing felt ridiculous.

That didn’t mean he could ignore it forever, so when presented with all of the acceptable items to wear, Belichick purposefully chose what he believed was the least fashionable choice … the humble grey hoodie. He soon even chopped the sleeves off of it, often with crooked and sloppy cuts, perhaps in an effort to make it less attractive.”

To the rule’s core, Belichick is doing nothing wrong.  But you know it has to irritate the NFL to see their most well known and recognizable coach publicly shaming their endorsement contracts.

It almost seems like Tom is going out of his way to promote companies that have nothing to do with the NFL on purpose.

He went so far as to publicly call Coca-Cola, and drinks like it (Pepsi), “poison for children.”  He goes completely against the food companies that have sponsored the NFL for years.

You know the NFL has hated having to deal with these 2 for the last 17 years, and handing over a 5th Super Bowl Championship to them, especially after a season in which Commissioner Roger Goodell suspended Brady for 4 games at the start of the season.