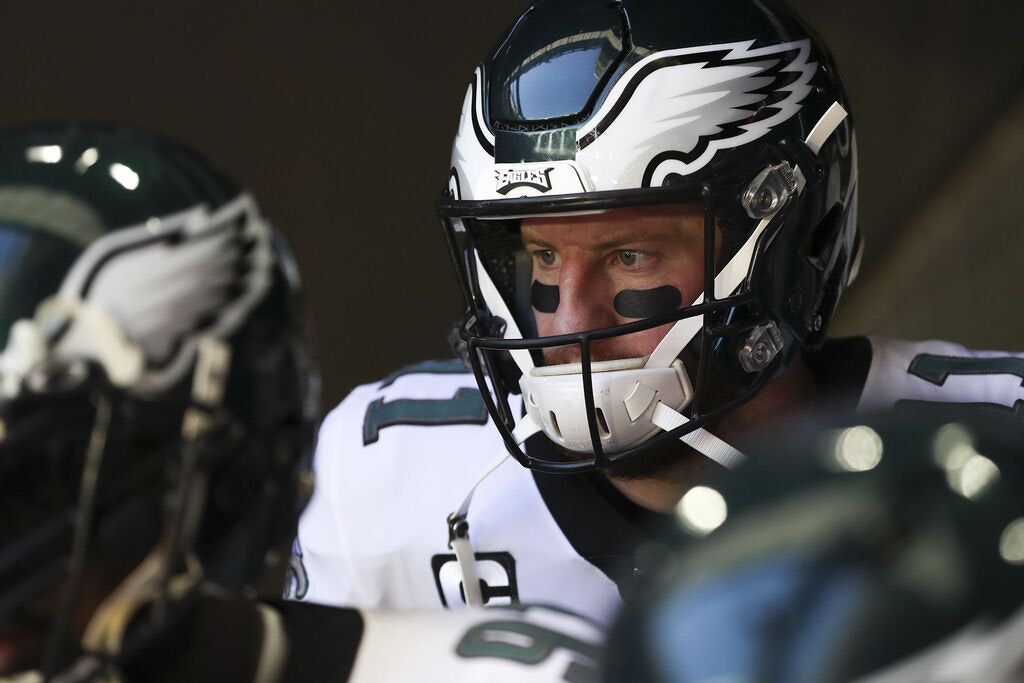 What should we make of the Carson Wentz trade?

The NFL has often been analogized as a game of chess, and while I love chess and see the symbolism of the 2 games, I would look at it as a yearlong, high-stakes game of poker. Some in position of power holding large piles of chips and attempting to bully the table. Other sitting short-stacked, calculating the losses and looking to the future. At the end there is left only 1 winner. This week we just saw a hand completed between the Philadelphia Eagles and the Indianapolis Colts.

For the past several months since Carson Wentz demanded a trade from the Eagles sports media has been projecting he would land with the Colts. All that time I’ve been railing like a fool on my podcast and to anyone who would listen that this is a ridiculous notion. My arguments: 1) the Colts are a well ran organization. They scout well, draft well, and have built a really talented team. You don’t do that by giving up assets and overpaying for players who’ve had short term success and appear to be broken. 2) If Frank Reich is such a quarterback whisperer then surely he can work his magic on a cheaper player who could potentially be better than Wentz was at his best in Reich’s system.

It turns out I was wrong in my predicting of the Colt’s plans for this coming season and the future. I’m not going to now attempt to claim a winner or loser of this trade but instead breakdown what I see as an end result of this transaction for both teams. I want to look at what needs to happen for this trade to be seen as a win for both of these franchises, and also look at what a loss in this situation looks like.

Let’s tackle the Colts first since they are the ones who got the player they wanted in the deal. From my weak understand of the contracts and how the salary caps work it appears the Colts have Carson Wentz for a 2-year deal around 24 million dollars a year and can cut him with little to no cap penalties after that if it doesn’t work out. To get him they gave up a 3rd round pick in 2021 draft and a 2nd in 2022 (with an escalator for that to become a 1st if Carson plays 75% of the snaps or 70% of the snaps and they make the playoffs in the 2021 season). What does that all mean to me? Well, I see Wentz as a project. He once looked unbelievable, but since that time he’s suffered several injuries and his output on the field has been mediocre at best. I would value him at a bottom 3rd quarterback in the league. I wouldn’t have made this deal because I think the probability of Wentz becoming the MVP caliber player he once was is low and not worth the assets given up nor the salary he will cost the team.

Those assets and that money could have been better spent elsewhere in my option. But he’s there now, what does winning this trade look like? Is it Championship or bust? If they make it to the AFC title game 1 year and make the playoffs the other but never making it to the Big Game a win? I think it would certainly have been worth the trade if they get that. What if they end up doing exactly what they did this past year? Making a wild card playoff spot and losing in the first round both year? That 2nd round pick becomes a first so their future is more difficult going forward, but they are in the exact same position as they were before making the deal. I would count that as a loss. And if Wentz never can stay healthy and the Colts miss the playoffs both years this is obviously a loss, but with another question to be asked: who is responsible for that loss? Is it Reich, who is known for being a great offensive coach and proven to be a capable and successful head coach? Or does this loss fall on the Colts GM, Chris Ballard, who has a track record of being a great personnel man for the organization? This one I don’t have an answer for, and I don’t think it matters. If it doesn’t work out then I will judge the organization on how they respond to that problem when or if arises.

Now for the Eagles side of things. For the past few years Howie Roseman, Eagles’ GM, has been looked at as one of the best general managers in the league. He built the team that brought the only football championship to the city of Philadelphia. What happened here? We have a saying at WCE, “Winning Cures Everything,” but sometimes winning doesn’t actually cure everything. Sometimes winning hides all the flaws of a team or organization, but if you keep winning those flaws don’t matter. It’s only when the winning stops are they all exposed. I believe Doug Peterson wasn’t a great coach. I can’t believe he went up against a true football master, a legend, in Bill Belichick in a Super Bowl and won. I Can’t believe Carson Wentz looked like an MVP of the NFL, then got hurt and was replaced by Nick Foles who looked the exact same and became Super Bowl MVP. These are things I can’t believe actually happened, but they did. After that magical season the man who looked like the true mastermind behind it all left to be the head coach of the Indianapolis Colts and all of the sudden, Foles and Peterson and Wentz all look exactly like I thought they would to begin with. It was all smoke and mirrors and everyone in the Eagles organization was left holding a losing hand. This is why I think Howie Roseman is one of the best GMs in the league, he made a mistake. Two mistakes. Two big mistakes. He trusted a coach and quarterback who weren’t really as good as their record showed. He doubled down on one of those mistakes by giving Wentz a massive extension. In spite of the mistakes he made that will set his franchise back no doubt, he also did the best thing he could for the franchise by trading Wentz away. Moving Wentz (no matter the compensation) is the solution.

In my option there is no scenario where the Eagles can come away from this, losers. Why? To properly explain that I’ll have to tell you a story about my childhood. Growing up I was raised by my grandpa. He was a big Italian man who was a god to me. He took me everywhere with him. My favorite times where the nights he brought me to play cards. A bunch of old men sitting around a table smoking and drinking and me ,6 or 7 years old, sitting right next to him. I heard things a child had no business hearing, but I sat and kept my mouth shut and just watched and listened. Every now and then my grandpa would throw his cards down in anger, swearing like crazy and then look down at me tell me this: “The most important thing you need to learn about life is as soon as you know you have a losing hand fold it. It doesn’t matter how big the pot is or how much you’ve thrown away trying to win. If you don’t think you can win get out and wait for another hand.” This has stuck with me long after he’s been gone. Usually at another point in the night things would get tense and everyone left in the hand looked serious and quit talking and grandpa would look down at me and point to one of the guys still in the hand and say “look at this dumb mother fucker, he knows he can’t win but he keeps dumping money into the pot hoping he can catch a miracle. Don’t ever be that guy hoping for a miracle. If you need a miracle you’ve already lost.”

The reason the Eagles are winners in this situation isn’t because they are better without Carson Wentz. It’s because Roseman did something here we rarely see in sports, or any other facet of life for that matter. He got deep into a huge pot with so much invested in it and realizing he had a low chance of coming out a winner so he folded. So many times people make decisions that are wrong, but instead of admitting the mistake they double down on them. They keep pressing deeper and deeper into the mistake trying everything to make it a winner until they are busted, removed from the table, left empty and often time alone. It doesn’t matter how much you lost in the hand or how stupid everyone watching thinks you look. Roseman realized he was in trouble, stepped back and assessed his situation and folded. He no longer believed he could win the hand so he got out.

Are the Eagles starting next season low on chips? Absolutely. They have a new head coach, a few more draft assets and they are playing the long game, but this is one organization I wouldn’t count on being down for too long. They are smart and will learn from this situation and will be back in the mix soon enough.

Oh, you are wondering who’s the dumb mother fucker at the table if it’s not the Colts or the Eagles? Who is the guy that just keeps dumping all his chips into the pot hoping for a miracle? That’s Ryan Pace.