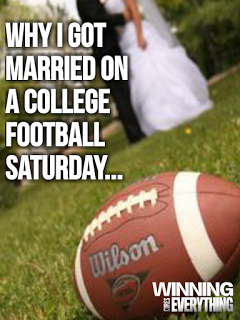 When I was young (like 9, maybe 10) my father and I had a conversation in the middle of football season.

He started buying season tickets to Alabama football games in 1988, when I was five.  It was a family gathering.  My little brother never cared to go, but I was bitten by the football bug early, so fall weekends became family trips from Memphis to Tupelo, MS on Friday night to stay with my grandparents, and then, on Saturday morning, we’d make the trek from Tupelo to Tuscaloosa or Birmingham for gamedays.

He wanted me to understand that, if I chose to get married on a fall Saturday, he would not be attending the wedding…

It’s not because he didn’t love me… it just came down to the fact that Alabama football was here first, and that takes precedence.

Don’t get me wrong, I get it.  I believed it for years and years.  Honestly, I still believe it.  In the South, the cliche is true.  Football is a religion.

Several people have asked me why I’m getting married this Saturday.  Let me explain.

The first date I ever took my soon-to-be wife on, we went to see Alabama and Florida Atlantic on Sept 22, 2012.  I met her in 2010 when she was my waitress at a restaurant during the UFC 111 fight between GSP and Dan Hardy.  We became best friends long before we started dating (which, for you youngsters, is the best way to go about things, by the way).

I remember absolutely falling in love with her.  She was amazing.  We were fans of the same team (although I’m a die-hard and she just enjoys it), and she challenged me intellectually.  In early 2014 we started discussing marriage, and that’s when she dropped the bomb on me.

Her dream as a little girl was always to have a fall wedding.

My thoughts immediately started trying to figure out how to plan this.  Can I talk her into a late summer wedding in August?  What is Alabama’s off-week going to be?  What away games could we maybe schedule it around?

One of the problems was that she wanted the wedding to be at dusk.  And our friends and family are all fans of a ton of other SEC teams.  Mississippi St, Tennessee, Florida, and even several Memphis season ticket holders.

We figured out a lot of the schedule, although times had not been announced.  But I did realize that the only way to do this would be to schedule it on a home game Saturday for Alabama, because it played into what may be the worst football Saturday for the rest of the season.  We could have picked Alabama’s bye week… but Ole Miss is playing Auburn, Georgia is playing Florida, Clemson / Florida St, Miami / Notre Dame, Michigan / Mich St, etc.  Not a good weekend to get married.

Luckily, my parents, grandparents, aunts, uncles, cousins, etc were all ok with this weekend, as it’s the Western Kentucky game.  We picked this weekend because we realized that most SEC teams are playing nobodies, and because, luckily, our families were fine with missing the Alabama home game against Western Kentucky (mainly because we will all be at the Ole Miss / Alabama game the week after anyway).  I knew the Bama game would be an early game because, honestly, that’s how the schedule has always played out.

My wonderful fiance agreed to allow me to setup TVs in the reception hall, so anyone could watch the games if they want.  I’ve setup our Roku devices so we can turn to whatever games we need as well, after the wedding.

The ceremony is at 6:30, and it’s about a 20 minute ceremony, so it’s after the Alabama game, and before the Tennessee / Virginia Tech game.  And everyone will be able to catch the end of the first half of both Miss St/South Carolina and Arkansas/TCU, which works perfectly for everyone, since most fans of those teams in attendance are not die-hards.

Now, I know that this all seems like a lot of work to get this done.  But when you’re in love with somebody that fits you perfectly, and she’s willing to compromise and work with you to make sure everybody we love is taken care of, you gotta roll with it.

So here’s my advice – if your fiance is only worried about herself, don’t marry her.  You’re saving yourself from problems in the future.  If she wants something (like a fall wedding) and is still willing to put up with having TVs with football on at the reception, and will schedule the ceremony around the end and beginning of football games, then you have it made.

Ending up with a woman that is understanding of other people’s passions (and my own) and i willing to make it work so that everyone ends up happy… don’t do anything to screw that up.  You have a winner.

So cheers to you women who get it and allow us football fans to be as ridiculous as we want to be.  You are the best, and we are unbelievably appreciative for you, even if we don’t always put the toilet seat down.