WCE Season 8, Episode 4 (Fri, Jan 13th)The Big Ten commissioner, Kevin Warren, has left for the Chicago Bears (2:37), so now what? QB recruit Jaden Rashada has not enrolled at Florida (10:26), apparently over an NIL issue. Clemson fired their OC and hired TCU's Garrett Riley (16:29). What's the latest on Jim Harbaugh & Michigan (23:00)? Is he going to the NFL or … END_OF_DOCUMENT_TOKEN_TO_BE_REPLACED 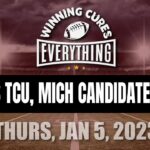 Season 8, Episode 2The national championship is on Monday, so of course I have to go ahead and give my preview & prediction for the Georgia vs TCU CFP National Championship game (2:00). The Rose Bowl TV viewership (8:30) was the lowest in history? Wake Forest transfer QB Sam Hartman commits to Notre Dame (11:53). Who are the coaching candidates at Michigan (13:23) if Jim … END_OF_DOCUMENT_TOKEN_TO_BE_REPLACED

Season 8, Episode 1I give my reaction to the CFP games - TCU's upset over Michigan (and is Jim Harbaugh going to the NFL?), Georgia survives Ohio State (is Ryan Day giving up play calling duties?), and then we discuss the NY6 games, what's next for the losers, and is Tulane ready to run the AAC?❗ Get a $50 Free Play when you sign up at BetUS! … END_OF_DOCUMENT_TOKEN_TO_BE_REPLACED 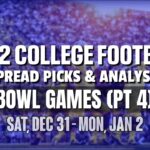